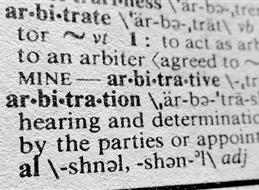 If you have never participated in an arbitration to resolve a commercial dispute, you should know that the rules and process are quite different from those that govern a court hearing, for example.   This section describes some of the terms you may encounter and their role in arbitration.

Administrator - A person or firm who is engaged by the parties to manage the administrative aspects of the dispute resolution process.  Often the American Arbitration Association (AAA).

Arbitration - A private, informal dispute-resolution process with no judge or jury.   It offers speed, simplicity, economy and finality.

Arbitrator - An individual who has no ties to either party and has a business, technical and or legal background to understand the issues involved.

Arbitration clause - An element in a contract between two parties that requires disputes to be resolved by arbitration.  Typically, the rules to be used are specified in the contract.

Award - The outcome of the arbitration, usually involves payment of monies and/or a performance requirement.

Attorney Fees - Generally not awarded unless the contract between the parties requires it.

Appeals - Challenges to an award are not permitted unless a conflict of interest on the part of an arbitrator can be shown, or a refusal to accept into evidence something that can be shown to have been crucial or there was some flagrant abuse of the process by an arbitrator.

Binding arbitration - A type of arbitration in which the award may not be appealed by the losing party except under extraordinary conditions (e.g. conflict of interest, not admitting certain evidence).

Depositions - Statements made by witnesses.  Inappropriate if numerous & lengthy.

Discovery - Unlike trials, there is no lengthy discovery; only an exchange of key, relevant documents.

Evidentiary Hearing - This is the equivalent of a courtroom, where evidence, both written and oral, is presented and challenged.

Expert Witnesses - Persons with expert knowledge. Usually not helpful unless case is particularly large or complex.

Interrogatories - Questions posed to witnesses.  Discouraged unless used to learn about existence of relevant documents or witnesses.

Mediation - A dispute resolution process similar to arbitration, except that there is no binding award.  The goal is to reach a mutually-agreed-upon course of action.

Neutral - Describes an arbitrator or mediator who has no connection with either of the parties.

Objections - Discouraged, because an award can be challenged if evidence was important and not allowed, and the arbitrators do not have to assign equal weight to all evidence in making their decision.

Parties - The two disputants, usually represented by executives and an attorney.

Preliminary hearings - This process, which is often conducted over the telephone, is used to settle administrative matters, such as when and where events take place.

Pro-Se - A Latin term referring to someone who represents him/herself in an arbitration without an attorney.  Not generally considered a good idea.

​Reasoned Award - An award in which the arbitrator explains his/her reasons for the decision.

Rules - In an arbitration, the process is governed by rules agreed-to by the parties, and not statutory regulations and laws, which may be more cumbersome.

Subpoena - The process of compelling the delivery of evidence or testimony.  Discouraged in arbitration since it increases the cost and complexity of the process.

Witnesses - Those persons who have testimony to give.  They may be examined and cross-examined during the evidentiary hearing.

Copyright 2016 by Raoul Drapeau.  All Rights Reserved.
View on Mobile